Without our skilled, motivated, and inquisitive employees, DE-CIX would not be where it is today. The love for technology and the enthusiasm for the further development of our global success story have made DE-CIX the heart of the Internet.

At DE-CIX, I am always directly up close to the heart of Internet technology – this is what makes my work so unique. I have been in the Internet industry since the beginning of my working life. In 2006, I switched from a DE-CIX customer (an ISP) directly to DE-CIX. At that time, I was the first employee at the Frankfurt office. For me it was – and still is – great to have helped build such an important company. DE-CIX grows every year and is an integral part of the Internet world; that gives me security. The team is terrific and remarkably competent; we are all part of the big ISP/IXP family.

Despite my many years of experience in the industry, I am always ready to learn new things and to better myself – and therefore my work. DE-CIX offers me this opportunity in a way which suits me down to the ground.

DE-CIX is the largest and one of the best Internet Exchanges worldwide. As a company, we are constantly growing, and our work is innovative and future-oriented – I am very proud to be a part of it and to actively contribute to its success. For me as a Network Operations Engineer, there are many things to analyze, test, and learn. I consider myself very lucky that DE-CIX supports me and my team in this way.

Our interconnection network is growing day by day. I think it's great that I can be there, up close and personal. I am constantly gaining important experience in new technologies and I can continuously refresh and expand my knowledge of network devices. To experience and share all this with my colleagues simply makes me happy.

When DE-CIX was founded in 1995, I worked for one of the biggest commercial ISPs at that time, Xlink. I experienced the founding of DE-CIX first hand and was fully involved in its development, as Xlink was one of the three companies that joined forces at that time and directly connected their networks through an exchange point in Frankfurt. Why Frankfurt? Because the telecommunication networks were already well developed there and because of its geographical location. That was an incredibly exciting time. In 2000, I finally switched to DE-CIX and took care of the technical management for 16 years. From 2000 to 2006, it was just Harald Summa and me, so I took over tasks like customer support or the website in addition to the technical department in Frankfurt. To build up the company in this way and to observe its constant growth was very varied and instructive; both exciting and extremely fulfilling for me. I like to refer to DE-CIX as my baby that in 2016 - when I moved to the position of Chief Technology Evangelist – grew up and flew the nest as such, from my perspective. It was time to hand over the responsibility to the next generation of engineers and technicians. It wasn’t easy for me, but I see in their faces every day the passion and dedication I want for my DE-CIX. It really could not have all gone better. Today I represent DE-CIX in technical committees and at events. I am also active in various community committees.

For me, my motivation for this special company comes mainly from the feeling of founding it. On the one hand, I find it exciting and challenging from a technical point of view to be “one level below” – quasi an ISP for ISPs. On the other hand, I think the company's structure is interesting. I have never been a fan of hierarchies and this is still noticeable today: decisions are made in a team, because shared, meaningful planning leads to the best implementation results. I am proud to be a part of the DE-CIX story from the very beginning and also of how the company has developed since.

I have been working at DE-CIX for 7 years now, and I really enjoy it, among other reasons because I have a wide range of tasks, which gives me daily challenges. Even outside of my own work environment, there are many other opportunities to get stuck in. This means that my expertise and horizon are constantly being expanded, which is enhanced through targeted further education.

The global network is getting bigger and faster, and Internet Exchanges like ours are essential for the entire Internet – with my work I can make an important contribution to advance and develop DE-CIX and the Internet.

I joined DE-CIX in October 2015 and, since the very first day, I have felt very comfortable. The family atmosphere and the flexibility of the company are second to none. I can contribute my knowledge and skills across teams and departments, which means that the tasks are always varied and never boring.

What I especially appreciate as a native Turkish woman is the cooperation with people from so many different nations. I speak fluent Turkish, French, German and English - I actually speak each of these languages every day!

The motivating working environment and the employee-friendly corporate culture makes my work at DE-CIX something special for me. I have always wanted to be part of the Internet industry; for me, there could be no better employer. Since March 2018, I am now part of the team and there’s no way I’d want to be anywhere else. We are a team comprised of different characters from different nations; this individuality is inspiring.

I have been working for DE-CIX customers since 2012 (already more than 2,500 days!). Here at work I can combine my passion for customer service with my fascination for technology. That's what I especially love about my colleagues: they have so much enthusiasm and knowledge.

At DE-CIX I can live out my passion. It’s an honor for me to work for the good of the Internet. 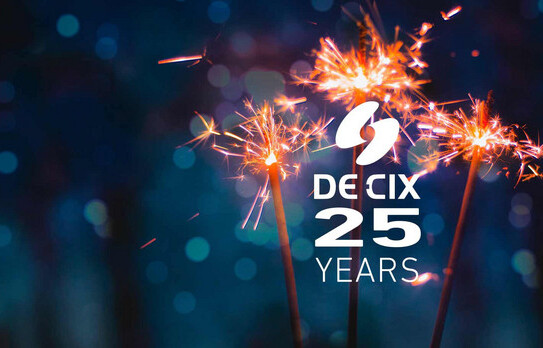 More than 25 years ago, in a little old post office in Frankfurt, three ISPs connected and formed the foundation of DE-CIX. A quarter century later, we look back on an extraordinary history and development, in Germany and around the world.